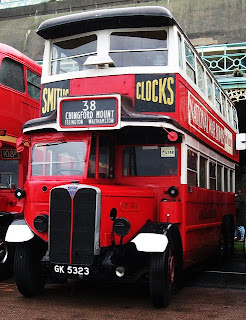 It is exactly 70 years since the first bombs fell on London in the Blitz.
So tonight we were at the London Transport Museum for the Mayor Boris Johnson to formally open the new Blitz exhibition, along with the German Ambassador and the Mayor of Dresden.
The exhibition has been developed in partnership with Coventry Transport Museum and the Verkehrsmuseum Dresden. It also commemorates the 65th anniversary of the Dresden bombing.
It demonstrates the consequences of the continuous bombing of London and the efforts made by the population as a whole and London Transport staff in particular.
LT165 has displaced DMS1 from the Museum and now resides between RM1737 (in DMS1's place) and the TF Green Line coach in support of this excellent new exhibition which runs until March 2011. It is well worth a visit, especially if you haven't been to Covent Garden for a while.

LT165 on its outing to the Brighton rally earlier this year and the leaflet promoting the new exhibition. LT165 has gained some blinds for route 11 to sit alongside RM1737!