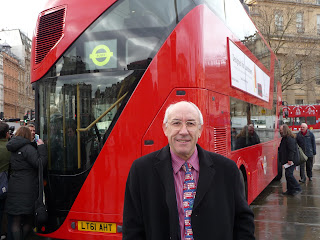 It does seem like a time to set the record straight.

After a tremendous launch of the New Bus for London, the media and some enthusiasts got themselves really excited about the sight of LT1 on the hard shoulder of the M1 last Monday.

Yes it was there - it was on it way to Millbrook for completion of handover testing and pre-delivery preparations.

The truth is that we had already learned from the delivery journey that a non-stop motorway journey can discharge the batteries and force the need for a stop to enable them to recover. And when it is in normal use the engine switches itself off whenever it has enough battery power.

So the precautionary stop on the M1 was no real surprise and it did take a while to discover that it wasn't clever electronic wizardry that caused the engine to stop but lack of fuel. Simple human error which has its roots in the care Arriva took to keep the bus safe whilst in London.

There have been some wonderful wild stories about illegal activity, lack of proper project management, and the driver's exposure to prosecution. Rather more simply it ran out of fuel, we put some more in, and off it went.

For those who chose to capitalise on this - just to say, it took seven years from authorisation of the Routemaster (1947) to prototype (1954). We have done this in less than half that.

It took two more years to get RM1 into service and even then it had numerous problems requiring a gearbox change, attention to subframe cracks, exceptional front brake temperatures and excessive tyre wear - all within the first six months.

We will have LT1 in service in less than two months.....

Today was the day that LT1, the first passenger-ready prototype New Bus for London, was launched in Trafalgar Square.

LT1 was delivered from Wrights' Ballymena factory on Tuesday. It ventured out for some radio testing earlier this week but at 0630 this morning it was parked, in the dark, outside City Hall. From 0700 LBC's Nick Ferrari broadcast his morning show from it, interviewing a number of key people including the Mayor.

As Nick's show ended at 1000 LBC's team swiftly removed all of the broadcast equipment and handed the bus back. It was promptly manoeuvred so a position where now, in daylight, it could be seen against Tower Bridge.

At this point the Mayor, Boris Johnson, announced he wanted to drive it again (he did so in Ballymena a few weeks ago). So within the precincts of Potters Field he moved it down to Tooley Street. He was keen to take it on the road but was persuaded otherwise.

So he handed it to me and I took it from City Hall, via Tooley Street and Stamford Street to Westminster Bridge. Three of my elite team of Metropolitan Police motorcyclists from the Safer Transport Command based with TfL escorted us.

Here we had arranged a particular photograph with the Houses of Parliament in the background. Photographs done I handed the bus in turn to Commissioner Peter Hendy who took it via Whitehall and onto Trafalgar Square where the main media were waiting.

From then on it was a constant stream of media interviews and demonstrations of the features of the bus.

I had warned people not to read too much into the registration shown at the Ballymena event recently. LT1 has its own "LT61"registration which will grace the further seven prototypes as well.


As those who have seen will know, the bus is built to an exciting modern design but with many acknowledgements to the Routemaster. The maroon interior, Indian Red wheels, Treadmaster flooring and shallow windows all offer a nod to the last bus specifically designed for London.

After that it is bristling with new features - it is basically an electric bus with a small engine to extend its range. (Several times during my journey was the engine off entirely whilst we ran on battery power).

And down to the smallest detail, its bell pushes are wireless so the miles of wiring associated with multiple hand pole buttons are eliminated.

The bus handles beautifully. It has an excellent turning circle, there are no rattles or similar noises, and accelerates and brakes very smoothly. The tight exit from City Hall onto a narrowed-by-roadworks Tooley Street was easily done.

We have already announced that from 20th February the first couple of LTs will enter service on route 38, operated by Arriva. Crew operation with full open boarding will be provided during the day. It will run on a conventional signal person operation basis at other times. The remaining vehicles will progressively join this group and all will be in use by Spring.

We already know from testing that the bus is delivering better fuel efficiency and lower emissions than expected. These new vehicles will make a positive contribution to London's bus fleet and although no fare paying passengers have yet been carried, the hundreds of visitors today at Trafalgar Square were almost completely positive in their reaction.

Yesterday was the UK Bus Awards - its 16th year and I have been to all of them. How it has grown since it was a small event in the City of London to now a full house in the Ballroom of the Hilton Hotel in Park Lane.

For the first time in many years Stephanie Flanders (daughter of one of my personal heroes Michael) and news anchor for BBC's Newsnight was unable to be the compare since it was of course a highly charged political day. Jane Hill, also from BBC News, took her place.

Minister for Transport Norman Baker was able to announce new initiatives for air quality improvements in London with TfL and another £30m Green Bus funding to continue to promote hybrid vehicles.

Former Minister Gillian Merron, now Chairman of Bus Users UK handed out the prizes and I was privileged to announce the winners for London Bus Garage of the Year (First's Lea Interchange) and be part of the Luke Rees-Pulley Award for the Top London Bus driver, Gary Jones from London United at Fulwell.

The UK Bus Awards celebrates success and the achievements of individuals and companies. The judges had some difficult choices to make. As usual Trent Barton were up there with the winners and Roger French of Brighton and Hove was rightly given the award for services to the bus industry.

A great event and by the time we are together again next year, the Olympics will have come and gone!