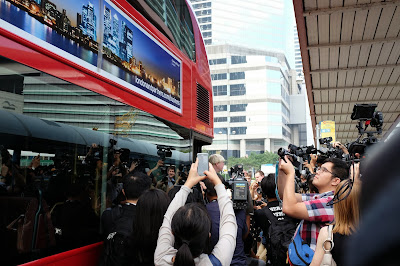 In a short week the Mayor Boris Johnson has led a posse of business leaders through China and to Hong Kong drumming up investment for London and championing our capital as THE place to be for business, culture, education and growth.

Surrounded by a mass of eager press, Boris spoke at countless lunches and dinners, ran daily back-to-back meetings as well as obliging the media with quotes and photo opportunities making front page headlines in both the UK and China.

As you might expect, the planning included a New Bus for London and a couple of Barclays Cycle Hire bikes. The bikes were shipped and presented to key business leaders in China whilst LT3 became the third New Bus for London to leave our shores and travel the world.

Since leaving the UK last May, LT1 has journeyed from New York through Colombia and is now in South Korea. LT2 has visited numerous European countries and most recently was in Austria. With their time fully committed to the GREAT Britain campaign run by UKTI, a third bus had to be shipped to Hong Kong.

When the bus arrived in Hong Kong, it was looked after by Kowloon Motor Bus and supported by Wrightbus. Thanks to our good relations with the Hong Kong Transport Department, the bus was licensed to move around and was in the capable hands of an outstanding KMB driver. On Thursday, Mark Nodder (CEO Wrightbus) and I carried out a dry run of activities for Friday when the Mayor was due to arrive. 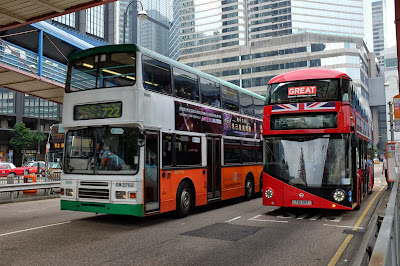 And so he did - we collected him in Wanchai and took him to the Star Ferry whereupon he took a return trip across to Kowloon. We were ceremoniously greeted by the Star Ferry crew in full dress uniform, even though we travelled in steerage - downstairs. The Mayor posed for the press and continued to answer a barrage of questions.

After a series of meetings, LT3 took him to the Shangri-La hotel for a business lunch attended by hundreds and he took the opportunity to express his wish that Hong Kong might soon also choose NBfL as its next generation double-decker. The city has the same air quality issues as London and the amazing fuel economy and 'best in world' emissions delivery make a fully air-conditioned NBfL a real prospect.Boris later announced - in his classic humorous style - that he was giving five New Bus for London vehicles to KMB as a gift from TfL!

The Chief Officers of KMB graciously accepted their Corgi models, much to my relief.

More photocalls, more interviews before a final reception at the residence of the Consul General. The Mayor departed for London and we cleared up our loose ends before preparing to leave town.

Many readers will know I spent a lot of time in this part of the world in the 1990s. In those days, Hong Kong used to buy old British buses. For some 30 years now they've been buying huge numbers of new buses from UK manufacturers. I wonder when we might see the iconic New Bus here soon....? 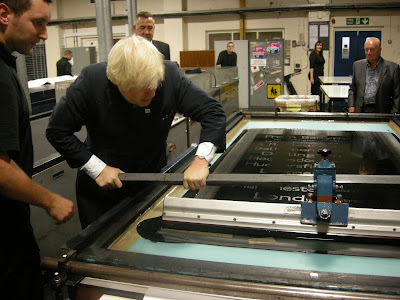 On Monday Mayor Boris Johnson, en route to the Conservative Party Conference in Manchester, called in to see McKenna Brothers – the main manufacturers of destination blinds for buses in London and around the world.

At their HQ in Middleton, Boris saw first hand this amazing family-owned business which makes nearly all of our printed destination blinds, as well as signage for numerous applications including electronic signs.
The printing of traditional destination blinds in London was one of the many specialisms held in-house for decades. London Transport perfected the silk-screen printing of them in huge quantities on paper bills glued to rolls of linen. 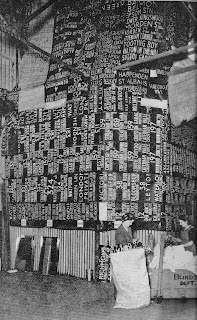 During the 1980s this work was outsourced and a few private firms provided the service instead. McKenna Brothers quickly noticed that a good eye for detail put them head and shoulders ahead of the competition and over time they became market leaders. Indeed now they supply the world.

Across the country there were also major developments with electronic equipment which McKennas were fast to exploit. LED displays are quick to modify but as yet do not display the clarity in the arduous typographical conditions of bus destination blinds which is why we in London (and indeed in Edinburgh) continue with print.

Nowadays the print is on superior material – untearable and with lasting light-fast properties. Boris tried his hand at the age old tradition of spreading ink across the back of a silk screen forcing ink around the lettering already set out to make the reversed-out displays that are familiar to all our passengers.

He made, and was presented, with a special blind naming not only some locations but also the materials produced across the whole of the UK as a result of New Bus for London orders.

Across the whole of Greater London, McKenna’s products are taken for granted – showing our 6.5m passengers a day where they are going.

His visit done, the Mayor continued with his journey to Manchester.