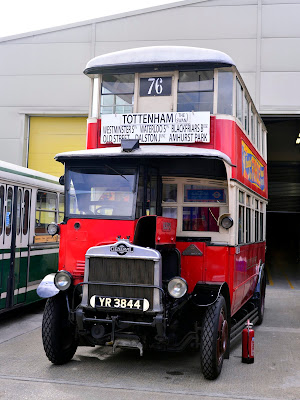 In August 2011, Tottenham was in the headlines when armed police fatally shot Mark Duggan in Ferry Lane, thus sparking what became a series of riots across suburban London. That night – 7/8th August – the London Fire Brigade reported over 2000 emergency calls.

When an uneasy calm returned, Tottenham showed the physical and social scars of the previous few days.

During the last two years, there have been a number of projects underway making improvements in the area. This included removal of the ‘urban motorway’ – the Tottenham gyratory system, returning the High Road to two way working and significantly improving the important interchange at Tottenham Hale.

So it was with excellent timing that a ‘village’ type cultural event took place in Tottenham on Saturday. At its heart was the celebration of 100 years of bus operations from Tottenham Garage. On the nearby green, the community enjoyed the festivities whilst Arriva organised some interesting vehicles to operate on route 76 – a route which has always been associated with the garage. In fact it only left Tottenham Garage once – in 1998, when Capital Citybus (my old company) took over the route moving it to Northumberland Park. Route 76 returned to Tottenham in 2003.

Routemaster and RT-family buses made ‘guest’ appearances on Saturday on the 76, as did a wartime Guy, but perhaps the most unusual were NS1995 and FRM1 from the London Transport Museum. Separated by only 40 years, they depicted the amazing transformation of the London bus. 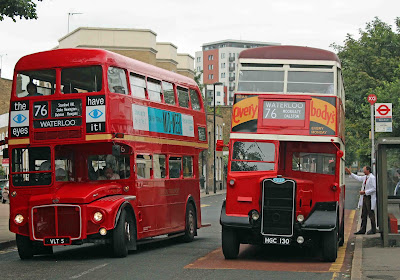 We collected the vehicles from Acton depot on Saturday morning and made trouble-free journeys to the start points. The NS carried expertly-made route boards for route 76 whilst the FRM already has destination blinds for this route.

The FRM operated its journey from the old terminus of Victoria and followed the contemporary route via Blackfriars Bridge and Queen Victoria Street. At Tottenham, it was made ready to recreate its first ever journey in public service –  24th June 1967 on route 34B. Thanks to the efforts of Arriva, I was able to position it in exactly the same spot emerging from the garage, even though this involved ignoring the garage’s one-way working and moving parked cars! 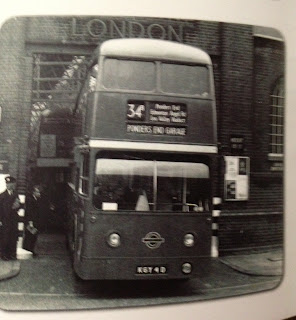 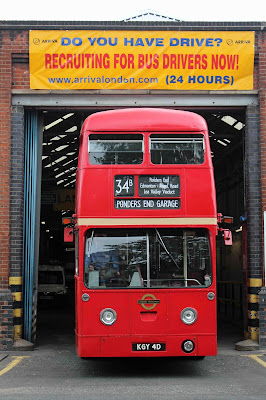 Brimsdown Power Station – the northern terminus, and indeed the reason for the 34B’s existence – has long since gone (although a small substation remains). We positioned it as close as we could on what is now a modern industrial estate which has replaced it.

Their jobs done for the day, both Museum vehicles headed back to Acton having performed faultlessly despite their grand age.

Congratulations to Arriva for staging this tremendous event and reminding the community how public transport is at its heart – taking people to work, school and shopping every day and providing considerable and sustainable employment in the centre of town.

A lesson from history

When the world sees the Routemaster bus they think London - iconic looks, great design and legendry reliability – “the like of which we will never see again.”

Since then every subsequent bus design is compared – generally unfavourably – a box shape, no relieving aesthetic features, and a heavier, more fuel-hungry vehicle in constant need of engineering attention.

But the early days of the Routemaster were anything but happy ones. Conceived in 1947, seven years were to elapse before the first prototype even appeared on the streets. A further two years before it entered service and after three further years it was withdrawn. Two more (bus) prototypes later joined the fleet. RM2 managed to stay on the road for about two years, and RM3 about 20 months.

In addition three other vehicles – fitted with ‘lorry’ bodies – were used to follow regular buses in service and simulate service operations.

Despite all the trial running, the first major entry into service in 1959 was disastrous when nearly 80 Routemasters replaced trolleybuses at West Ham and Poplar.  On the first day the garages received over 100 road calls from bus crews in trouble. Subsequently the situation remained dire, with design defects and poor manufacturing standards often to blame. Numerous campaigns of modifications were immediately put into place.

A major failure caused 22 of them to be removed from service when a complete steering column fractured and all the others were found to be at risk of the same thing.

In the first two years there were 55 campaigns for mechanical alterations, 24 campaigns for electrical issues and 38 for bodywork.

The District Engineer at the garages recorded that in the 15 months to August 1961 on 142 Routemasters he changed:

He records a similar list for electrical and body work issues.

The heating and ventilation system was found to be particularly poor and despite efforts over the years it remained a real weakness of the design.

During those awful times there were long gaps in service and frequent breakdowns. Passengers were frequently inconvenienced and the staff increasingly demoralised.

In 1963 – some nine years after the first prototype entered service and despite hundreds of thousands of miles of passenger operation – a major rework campaign started. All of the issues were addressed on over a thousand vehicles and slowly the fleet began to deliver a reasonable level of reliability.

I have not found any definitive record of the costs incurred – paid for by fares and taxes alike. The costs of prototype buses which only clocked up a couple of years’ service each; the cost of major rework campaigns; and the cost of major losses of service in terms of revenue.  Over and above this, the countless London Transport engineers and research staff working full time to resolve the problems.

What is clear is that despite extensive prototype testing, and early experience in operation, a very large number of problems in design, manufacture and maintenance did not come to light till after entry into service.

An expensive and lengthy process in the end delivered to London a bus which became a design classic. It was reliable, cheap to run, loved by passengers, staff and engineers alike. Nearly 60 years later it is still in evidence in London.

That process was extraordinarily slow, and required a huge amount of effort. Imagine if in this modern demanding world, a bus had taken nine years from design to operational reliability!