More steam on the Underground

With the Underground's 150 anniversary now only a month away there was one more full-scale rehearsal needed to prove that we can indeed haul passengers along that original 1863 route from Paddington to Farringdon.


Early on Sunday morning (at 0152 in fact), we are standing on platform 1 at Earls Court watching restored Met loco No 1, lead the equally expertly-restored Metropolitan Coach 353, together with a flat wagon (with emergency water) and at the rear electric loco Sarah Siddons. Those charged with checking this operation, together with a few others and a couple of members of the press boarded and we set off.

Riding in 353 we again experienced the sensation of being hauled by steam: the smoke, the smell, the sounds. Yes we chuffed around the Outer Circle at 2am in 2012 as if it was an every day occurrence. The coach itself had several lives. It was built in 1892 and retired from London in 1905, whereupon it saw service on the Weston, Clevedon and Portishead Light Railway.


After the line closed in 1940, it went on to be used as a shop, a clubhouse for US servicemen, a home and a farm outbuilding. The restoration has been expertly done by the Ffestiniog Railway.

Periodically, from the anonymous darkness of the tunnels we would pass through familiar Underground stations - High Street Kensington, Edgware Road, Baker Street (where we get vented huge quantities of steam to test the station's atmospheric reaction), and perhaps most amazingly of all Kings Cross which is the most modern on this section of line. Bright lights, illuminated signs, modern fittings, all glimpsed through the varnished wooden window frames and gold fittings.

At 0302 we pulled into the bay road at Moorgate, where No 1's water tanks were replenished.


Dating from 1898 she pulled her load through the tunnels - back in 1963 she played a major part in the Underground's centenary but subsequently changed hands and deteriorated until this recent expert restoration which brings her back into action again on London metals exactly 50 years later.


The youngest member of the train is of course the most famous - Sarah Siddons - the 1923 electric locomotive which was on hand in case of assistance being needed and to lead the entourage back from Moorgate later.

The train paused at Edgware Road on the return before returning through Earl's Court as London was again waking.

With all the tests for this year completed the scene is now set for the rehearsal and formal events in January 2013 which will mark the 150th anniversary. It will see fare-paying passengers - as well as dignitaries and VIPs - re-enact the experiences of a century and a half ago. 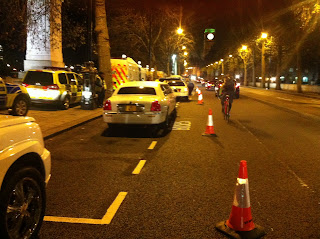 This weekend I was able to join two of my night time enforcement teams who are working continuously to maintain and improve safety on London's streets.

Operation Kansas targeted stretched limousines and novelty vehicles and together with VOSA we set up a facility on Victoria Embankment where vehicles could be inspected and checked.

The population of stretched limos has grown considerably in recent years and many operate in dubious legal territory. Vehicles with more than 8 seats need an Operator's Licence but many run without them. Moreover the construction of these conversions is often dangerous. We found plywood roofs, non-flame resistant materials, and glass which cannot be broken or cut in an emergency. With such potential traps for passengers in the event of a crash or fire, we were staggered to find doors which could not be opened, as well as faulty brakes, steering and defective lighting.

Some vehicles were so dangerous they were immediately impounded, others had to be towed away.

As you would expect,  for as long as vehicles are operated in this condition we will continue to target them. It causes some inconvenience to the occupants but without a doubt they had no idea their safety was being risked. Needless to say there are respectable operators and their vehicles fully comply and are well maintained. Indeed after spending £80,000 or more on such exotic equipment you really would take good care of them, wouldn't you?

Later I joined our Taxi and Private Hire compliance team and we toured Kings Cross, the West End and Camden. Again we were specifically looking for Private Hire vehicles which were plying for hire - something only licensed black cabs are legally entitled to do. Late night venues are an obvious place for such vehicles to congregate and we found again cases where drivers were taking passengers who had not pre-booked, as they are required to be. These drivers will now find their licences being reviewed, as will those black cab drivers who only hold suburban (yellow) licences but were plying for hire with their lights on inside the central London area.

Why do we do this? The law provides two quite distinct types of 'taxi' services in London - both designed to suit different markets but both arranged to protect customers, many of whom are vulnerable. Unless we ensure the services are operating legally the way is open for unscrupulous people to take advantage - if you get in an unlicensed vehicle then it's just like getting into a stranger's car.
Posted by Leon Daniels at 22:31 1 comment: