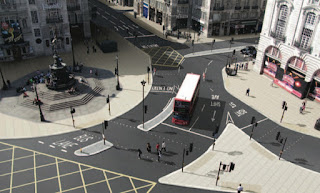 The return of two way traffic to Piccadilly after over 40 years marks the end of an extraordinary effort by Westminster City Council, Crown Estates and Transport for London to return the 1960s one-way systems to proper streets for people to use.

The dramatic increase in private vehicles in what is now Greater London gave rise to the Road Traffic and Road Improvements Act 1960. Parking Meters and Traffic Wardens were the first manifestation of the new law. It also paved the way for the London Traffic Management Unit whose sole job was to speed up traffic. An interesting predecessor to TfL's current role in smoothing traffic flow.

The newly-formed Greater London Council soon endorsed a series of what were called Traffic Management Schemes. In essence they were a major one-way systems often using parallel residential roads. Aldgate, Tottenham Court Road, Earls Court, Kings Cross, London Bridge and Victoria's schemes all were introduced by the end of 1965. There were similar schemes in the suburbs - Richmond, Hackney, Holloway all followed suit.

Nominally as a week's experiment westbound traffic in Piccadilly was diverted to St James' St and Pall Mall from 15th July 1961 and was introduced permanently (until 23rd October 2011) from 26th November.

Needless to say the improved road capacity driven from the one-way systems and on-street parking restrictions did speed up traffic but that simply encouraged the growth to increase further. Average speeds fell again over time and meanwhile more and more of the multi-lane one-way roads became 'urban motorways' which were damaging to business, pedestrians and took bus services away from their ideal destinations.

Now such schemes are being removed and the flagship West End one is now complete. Earlier this year St James' St and Pall Mall were converted to two-way working and now, in a £14m scheme, Piccadilly itself reopened to all westbound traffic (buses have had their own contra-flow lane since the 1970s).

Now the streets in this part of London look normal again. Wide pavements, no railings, high quality materials and space for people to walk and cycle as well as use the road network.

There is a formal launch on this week with a collection of 1960s vehicles including one rather well-known Routemaster!! Watch this space!

On Monday 17th October we launch to the public the full real time information service for bus users. This has been under test for several weeks and the test site address has already spread.

But from Monday it will work from http://www.tfl.gov.uk/buses. Much more usefully smartphone users will be taken directly to the new mobile site which is configured for easy reading on such devices.

The new service provides real time information for all 19,000 bus stops on the network. It's like have Countdown in your hand. You can access it on-line, on your phone, and by text by sending the bus stop code to 87287. The SMS text service costs 12p per call - all the on-line information is free.

It is better than a Countdown sign which you can only see at the stop. In future you will be able to stay at home, work, or other venue until it is time to walk to your stop. For some people this will bring added security as they will not be waiting at the bus stop for too long. In other cases I foresee, for example, parents being able to predict the arrival times of their children at stops and being able to meet them off the bus.

And we would never have been able to fit Countdown signs at all the stops. We are adding another signs at 500 locations and renewing the entire network of signs. But the cost of doing so in many areas was prohibitive, yet to some, information where the frequencies are lower is actually more important. At a stroke this overcomes the problem of providing information in such places.

I predict that this development which make a big change to the way in which people plan their journeys and use the bus network. Certainly those who have been trying it out already have already indicated just how valuable it is. 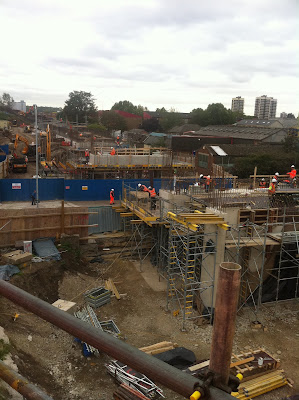 I am still catching up so here is another story from last weekend.

On Friday 7th October I did a whistlestop tour around various railway developments and amongst them the progress being made to connect the East London Line south of Surrey Quays so it can connect to Clapham Junction and thus create an orbital railway around London.

This link will be ready in Spring 2012 and follows an old railway alignment which closed in 1911 between Rotherhithe and Peckham. It threads its way through an area alongside Millwall Football Club, between businesses and homes to make this 1.5m connection.

Work was proceeding at a great speed and the day I was there was immediately prior to the arrival of the bridge to span Surrey Canal Road which was at that moment on the motorway being escorted to London.

Above therefore is perhaps the last picture of the site prior to the arrival of the bridge which went into place over the weekend.

The East London Line is growing at a remarkable rate. Dating back to 1869 this quiet backwater of the London Underground was to some extent neglected and unloved. It had a thorough refurbishment in the mid 1990s only to have a complete upgrade as part of a bigger and better Overground and opening again in 2011 after a three year upgrade to Network Rail standards. Now connected to the North London Line it provided new links across north east inner London.

With the new section opened next year the missing link will allow further orbital journeys to give relief to hard-pressed main line stations including London Bridge. 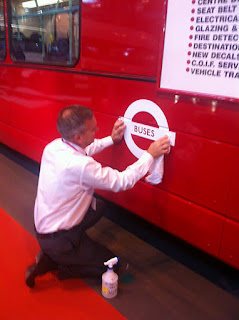 This is the start of some catch-ups - sorry for so little activity recently.

It is show season with the American Passenger Transportation Association event in New Orleans and Coach & Bus Live at NEC Birmingham both this week and only 12 days before Busworld at Kortrijt.

These events very much demonstrate the temperature of the industry's economy and in the case of the UK Show the first thing obvious to visitors was that on the very long walk from the airport/station apart from the Horse of the Year Show there were absolutely no other events going on at NEC. Mile after mile of empty exhibition areas until you arrive at Hall 17, home of Coach & Bus Live which itself only occupied two-thirds of the available space.
Although there is a UK Show every year they alternate between this rather smaller one and a bigger event in even years. Although Volvo and ADL had their own large stands there were relatively few other major manufacturers - King Long, BMC and some others but generally rather thin.

It is not surprising. Despite the very thin times being experienced by NEC the cost of taking the hall is still expensive and the cost of having a stand and manning it easily runs into six figures. More than one manufacturer expresses the view that for the money they could take their best and/or most promising customers to an idyllic island paradise for a long weekend and have their exclusive attention. In contrast those same customers step off one stand duly fed and watered and go straight to a competitor's.

The bulk of these Shows is increasingly taken up by the supporting manufacturers of components, materials and services and perhaps the most interesting continues to be those promoting the benefits of new technology. Some of the more far-thinking operators were clearly engaged in opportunities for improved efficiency and reduced costs by engaging with them.

I had one commitment myself which was to be part of the presentation in the Show's auditorium for operators to learn about the Olympic Games and how it affects London and the other venues.

This took place in an open seated area in the middle of the Show. With a headset microphone to help beat the background noise of the whole event and people coming and going throughout it felt like I was demonstrating a new foot bath in a department store but it was good to see so many coach operators eager to learn about the business opportunities which the Games will bring, as well as the making sure they were prepared for the changes to the way the road network will operate.

A First Wrights-bodied Volvo was on display demonstrating the quality of external refurbishments being undertaken, and in the moments before opening TfL Roundels were being applied.