Friday 27th September was the end of an interesting chapter of London’s bus history, and for me personally.

In 1988, when working at Ensign Bus Services Ltd, I won four bus routes in Romford – 165, 365, 246 and 446. Two other routes, 248 and 252 were won by East Midlands.
At the time, it was the biggest private sector win over London Transport ever. Indeed, it caused Hornchurch Garage to close. The realities of competitive tendering were beginning to dawn on the incumbent operator.

I remember like it was yesterday, working all night to be ready, with our fleet of buses springing into service in September 1988. East Midlands did not fair so well and we took over their routes too, but not before another long night at start up.
Our cornerstone of Romford routes were repeatedly tendered and retained although operations physically transferred to a new site at Dagenham Dock. Others tried to unseat us from these routes but we endured.

Over time, Ensign Bus Services' ownership changed – an abortive sale to a US company came and went – and we ended up being owned by CNT Holdings in Hong Kong. In the meantime, London Transport’s buses were also privatized and our nearest neighbour became an operating unit called East London which eventually was sold to Stagecoach.

In due course, in 1995, my management team, led by my great friend Brendan Glyde and I, bought the company. Soon after, these routes were again tendered and retained – much to our relief and despite a massive effort by others to beat us. But by 1998, we had much expanded the business and having exhausted the borrowing capacity and patience of our financial backers, we sold it on to FirstGroup plc.

The business was joined with CentreWest London Buses Ltd – Peter Hendy’s former company now also in FirstGroup ownership. Despite contract churn across East and West London these core routes remained steadfastly in Dagenham Dock with us, although a new depot on a nearby site replaced the old one.

As a director of First, I ceased to have direct management responsibility for London operations in 2005 but continued to keep a fatherly eye on those Romford routes.

So here we are, 25 years later, by a quirk of fate it was me, now in my capacity as MD Surface Transport at TfL, who took them away and gave them (back) to East London – now a subsidiary (for the second time) of Stagecoach.

After a quarter of a century they are returning from whence they came to the “London Transport” operator in the area although Hornchurch Garage itself is no more – indeed is a housing estate.

On Friday, I went to Romford for a nostalgic ride around my old network, reminiscing about how I used to drive on these routes especially late at night and at weekends. Much, of course, has changed in Romford since then. When the routes finished on Friday night, it completed First's exit from London and the last real traces of my old company.

To all who made that chapter so enjoyable – employees of Ensignbus, Capital Citybus, and First – thank you and enjoy the memory! 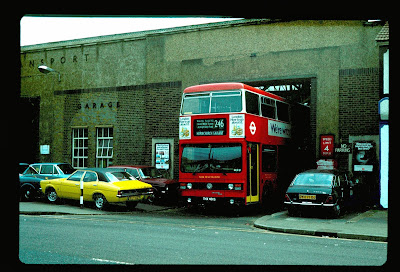 This is the start of a progressive conversion of the route which will be complete in the next 10 days adding a further 27 or so vehicles to the existing fleet.

Surprised passengers were again delighted to hop on & off, and many tourists were scrambling aboard London's latest icon.

Today’s long-planned Heavy Goods Vehicle safety event was promoting further steps to try and reduce the risk to cyclists from large lorries. Sadly the event was marred by the death of another cyclist – the seventh this year and the fifth in collision with an HGV. My sympathies go out to the family.

At the ‘Exchanging Places’ event opposite the Houses of Parliament, people were able to sit in the cab of a well-equipped HGV and see first hand the blind spots which lorry drivers must contend with.

Boris Johnson and Transport Minister Stephen Hammond were amongst those to experience this.

To make sure that this is a two-way process, promoting safety, our Police will be on the streets of London at specific locations inviting cyclists to see it from the lorry driver’s point of view and caution those who break the law.

Vulnerable road users (which includes pedestrians), can be in jeopardy if they do not remain vigilant whilst using our roads and footways.

The Mayor and the Minister announced further measures are to be considered. These include the fitting out of HGVs with appropriate safety features, including side guards, mirrors, Fresnel lenses. Additionally all HGV drivers would undertake training highlighting the risks to vulnerable road users. These features are already contractually required for work on GLA family projects including all London Underground and Crossrail works. Good quality operators have also adopted these measures and we are keen for others to follow suit.

Alongside this event, further up the road, we had a joint enforcement operation with VOSA, Police, Department for Works and Pensions and Her Majesty’s Revenue and Customs. Large vehicles were being inspected to make sure that even the minimum legal standards are being achieved – both in terms of vehicle standards, load security and drivers’ standards.

In a series of random checks, rather shockingly nearly a third of vehicles stopped failed to meet those standards. Out of 59 vehicles, 16 had mechanical defects, two drivers had breached Driver Hours Regulations, and 17 were issued with fixed penalty notices. One vehicle with numerous defects had no valid ‘O’ licence nor did the driver have any entitlement to drive.

Certain types of large vehicles are excluded from the Regulations if they are classified as ‘plant’. Thus one heavily overloaded, four-axle volumetric mixer, which needs no Operator’s Licence, HGV drivers’ licence, or HGV test certificate was not only destroying London’s roads but had a defective tyre as well.

We recognise freight as an important part of London’s traffic. The industry delivers goods, facilitates construction and supplies our needs. Indeed our economy depends on it. However given the unequal fight between such large and heavy vehicles against vulnerable road users - we must make sure that all road users are at least following minimum standards.