One of my correspondents stated recently that there is no provision for cyclists at the Olympic Games.


This is not true! Here is the real situaion!

Routes:
There are a number of routes leading to the Southern Spectator Transport Mall for those travelling from parts of Newham, although it is expected the vast majority of people will use the much larger parking facility at Victoria Park.

Cyclists will still be able to travel along the High Street section not included in the Cycle Super Highway 2 route, although the ODA has worked with TfL and Newham Council to create preferred routes which offer safe passage to the Southern Spectator Transport mall from the South (Bow area) and North (Stratford area). The preferred routes, include:

Heading north-east along Cycle Super Highway 2 and turning right at Tomlins Grove (just south of Bow Church DLR) and following the route crossing the A12 via an underpass, going past through 3 Mills and heading north under the Greenway onto Abbey Road, Rick Roberts Way and into the southern spectator transport mall.

Heading north-east along Cycle Super Highway 2 up to the Bow roundabout. Dismounting here and using the access ramp onto the floating towpath in the north-west corner of the roundabout heading back under the flyover/roundabout using the new floating towpath.  Heading south on the Lea Navigation towpath to the road bridge into Three Mills.  Following the same route as outlined above to reach the cycle parking on the southern spectator transport mall.

Head south on A11 through Stratford town centre gyratory, onto Stratford High Street, left onto Cam Road and onto Channelsea Path to Abbey Lane.  Onto Rick Roberts Way and into the southern spectator transport mall.

Greenway from Beckton direction towards the southern spectator transport mall.


Clearly cyclists can use other routes, these are just the designated ones created solely for the Games as part of the overall cycling strategy. 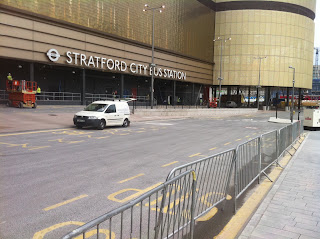 Only some three weeks away is the opening of Westfield's development at Stratford.

This week I had a really good look 'behind the scenes' at this huge project. With 1.9m sq ft of retail space it will be Europe's largest urban shopping centre. All the major retailers are there flanked by John Lewis at one end and Marks and Spencer at the other. There is a 17-screen Vue cinema too. There is also high quality office space and 1.3m sq ft of hotel space as well - both Premier Inn and Holiday Inn are currently at an advanced stage of construction. When the Games are over the Athletes' Village will form a catchment area of homes for the facility as well.

Westfield Stratford City forms part of an important gateway to the Olympic Park and a significant proportion of Games visitors will enter or leave through this site. As a consequence some of our traffic infrastructure is designed to be easily removeable - you won't see it at all during the Opening Ceremony.

It has its own entrance to Stratford Station and a new bus station to serve it. Bus routes will start to operate there on 10th September ahead of the main opening, generally out of service, and by some quirk of tendering when the operation goes live on 13th First will serve it with route D8 for four days before Go Ahead takes the route over the following Saturday.
The new facility is outstanding - three floors of retail space and there is round the clock working to finish the fitting out, deliver the stock and train the staff. All this is taking place under appropriate security. From my layman's viewpoint there seems a lot to be done but as ever sites like these suddenly are transformed overnight. My old handyman at Capital Citybus, when confronted with what looked like a bomb site and an impossible deadline would typically say "just a bit of clearing up".

Shown above is the new Stratford City Bus Station - awaiting its first bus service and below the new Underground station ticket hall all ready to receive its first passengers. 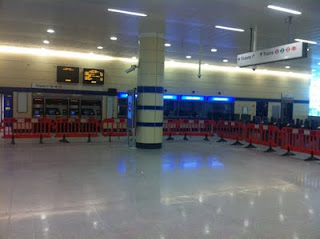 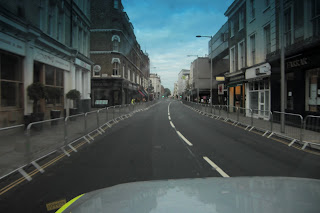 Today's story has to be about the London-Surrey Cycle Race which was a test event for the Olympic Games next year and which took place today.

This was really big - the largest barriered event in the UK - some 140km long. From The Mall it left London via Brompton Road, Fulham Road, Putney Bridge, Richmond Park and Kingston out to Dorking. A couple of circuits of Box Hill (the women's Olympic course; the men will do 11 circuits), and then back again.

The entire route had to be closed in the early hours of Sunday morning and left sterile until the competitors passed back through it on their return.

The logistics arrangements were huge. We notified residents and businesses within 400m of the route in London by personal letter twice. It was on the internet, in newspapers, on the radio and there were 'drop-in' centres in each of the London Boroughs. The Boroughs themselves did all they could to help people locally. We even put leaflets under the wipers of cars parked (legally!) on the route over the previous two weeks, and emailed Oyster Card holders in the area. We also talked to hospitals, churches and other affected organisations.

But you don't take out that much road space without causing some difficulties and by the end of last week we had helped many people make their plans - mothers-to-be with due dates in this fortnight, people leaving to go on holiday and so on.

The great news is that it was a success. For such a huge event no arrests and only 16 cars found on the course when we had to close the roads and so had to be towed away.

Of course there were traffic delays around the area and quite a few people who seemed to know nothing about the event and who chose to bring their cars into town were affected.

This was of course an Olympic test event - a race organised as part of London Prepares. This LOCOG event was organised in collaboration with TfL, the London Boroughs, DfT, the emergency services and many others. It is a dress rehearsal for the first two days of the 2012 Games - (the Women's and men's separate races are on 28th and 29th July 2012). Indeed the first one will be the first at which someone will be awarded a medal and today it was a GB competitor who won so potentially our first Gold Medal.

Numerous lessons were learned of course - that's why we have test events. Thousands of people lined the route and cheered the riders on. All were part of London's daily visitor economy which delivers millions of pounds into the businesses in the capital.

We will be reviewing the whole day's activities (which started with the placing of the barriers in strategic places earlier in the week!) in preparation for next year.

A good time therefore to thank everyone involved for their hard work in the planning and delivery; to the London Boroughs for all their work; to all the agencies which contributed; and to everyone for making it such a success.

At 0600 in a Police vehicle my team and I inspected the whole route from end to end. An amazingly deserted, barriered Fulham Road. We got from The Mall the Kingston in 20 mins!

You will only get one message from me this week as we appear to have resumed some kind of normality after several days of frightening attacks on people, property and the communities which make up our London.

The commitment of our staff in 'carrying on' under these circumstances has been extraordinary. Whilst we obviously had to curtail some services and take our staff out of harm's way the vast majority of our services - from buses to bike hire carried on. This was entirely due to the selflessness of our staff at all levels and from all grades. And by "our staff" I include the wider TfL family of contractors such as those who provide the bus services, the Woolwich Ferry, the Barclays Cycle Hire operation etc for Surface Transport as well as the DLR, London Overground and others for London Underground and Rail.

There are countless stories of stories of staff who did extraordinary things - not just operating staff but also admin people as well. That quiet resolve ensured that we defied those who would seek to disrupt our city.

I hope my readers will join with me in thanking them all for everything they did.
....
Posted by Leon Daniels at 21:47 3 comments: