Birthday celebrations on the Epping-Ongar Railway 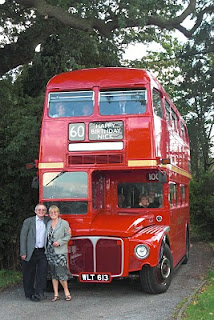 For the third decade in a row I have been spending this day in the year celebrating a major birthday of my great friend Nick Agnew who has spent, I think, his entire adult working life with TfL and its predecessors.


For his 40th we were on a barge, for his 50th we were somewhere in Essex, and today for his 60th we were (all fifty of us!) at a lunch which melted into a visit to the Epping-Ongar Railway at North Weald.
At EOR they are making progress into returning it to a fully operating railway for the first time since about 2004 (although it had ceased being part of the London Underground in 1994).

Guests included Lord Tunnicliffe and numerous former London Transport people and their wives/partners some of whom only see each other on occasions like this, especially those now retired. 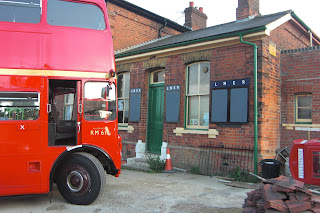 Organisations need a clever mix of new talent and great experience and needless to say TfL is no exception. But also very obvious today was the huge wealth of talent and knowledge that grew up thanks to the comprehensive training and career development efforts of London Transport which took young people and gave them opportunities in bus, rail and overseas, in both engineering, operating and technical fields.
It is more difficult in these times for the larger transport organisations to maintain such programmes and I think we all aspire to do more and grow talent where we can.

Getting back to today RM613, which I think you probably know I co-own with Nick and two others, provided the transport between Epping Station, lunch and North Weald Station. It was on this occasion expertly driven by Roger Wright whose London Bus and Truck organisation did much of the restoration work a few years ago.

You have another chance to see RM613 and other Routemasters in action when the second annual pilgrimage to Imber takes place next Saturday. Imber is a Wiltshire village which was seized by the MoD during World War II and never given back. On Saturday 18th September it is being opened for one day only which will permit a service to take place at the Church. Various Routemasters will be running a bus service from Warminster for that day only. This is a chance to travel on some roads which are normally closed to all traffic, as well as 'see the sights' in this forgotten village.

Nick and Carole pose with RM613 at our lunch venue and later we are parked at North Weald Station.