The conclusion of my 2009 Christmas Eve story

Regular readers will remember the story from four years ago, the one about the old London bus we found in France - of all places.

To recap go to
http://leondaniels.blogspot.co.uk/2009/12/story-of-rtw335-tale-for-christmas.html 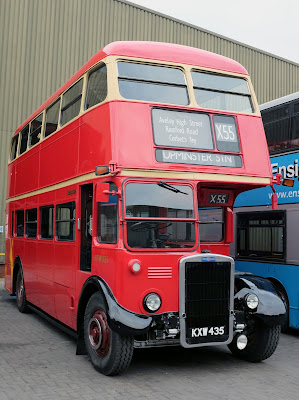 Originally brought home in 2004, it was despatched for restoration. It was a huge job! As I had previously described – the interior, the hole in the floor, etc – it was a complete wreck.

The photos speak for themselves:

One of our bigger challenges for the journey was a major fuel problem which was overcome by feeding the header tank from a 25litre plastic container down a hosepipe through the front saloon window.


Incredible considering the length of time of disuse and all we know about the degradation of fuel systems and the fungus that grows in it.

A final problem was the refusal of the DVLA to return its original registration number – the authorities confused as ever of decades of identity swaps by London buses and an ever-reducing number of us who know how/why it was done and how to convince modern young officials of the legitimacy of it all.

And so eventually they were – and just in time for the vehicle to make its first official debut on Saturday along with other vintage vehicles at the annual Ensignbus running day.

You will agree that a fabulous job has been done.